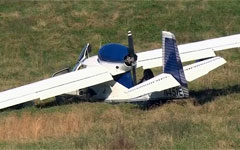 Sadly there is a report of another Seabee "down".

At about 0810 eastern standard time, a Republic RC-3, N451E (MSN 182), was substantially damaged when it was involved in an accident near Advance, North Carolina. The airline transport pilot was seriously injured. The airplane was operated as a Title 14 Code of Federal Regulations Part 91 personal flight.

According to a mechanic who test flew the airplane the day prior to the accident, he “dipped” the fuel tanks and the airplane had about 18 gallons of fuel on board prior to the pilot departing on a 30-45 minute flight that evening. On the day of the accident the pilot departed on an approximate 30-minute flight from his home airport with an intended destination of Twin Lakes Airport (8A7), Mocksville, North Carolina.

According to the mechanic, that make and model of airplane can burn between 13.5 and 20 gallons of fuel per hour. He also reported that they had not calibrated the fuel flow gauge for the airplane prior to the accident flight. Lastly, the mechanic asked the pilot the night before and the morning of the accident if there was enough fuel in the airplane, to which the pilot stated, “it was fine.”

The airplane came to rest in a field less than 2 miles from the destination airport. A Federal Aviation Administration inspector responded to the accident site and examined the airplane. The examination revealed that the airplane incurred substantial damage to the wing spar during the accident. The propeller was rotated by hand and crankshaft continuity was confirmed. In addition, he noted that there was no fuel in the fuel tanks and about 4 drops of fuel in the fuel filter. Furthermore, there was no evidence of fuel spillage at the accident site.

The airframe and engine were recovered and will be examined. [NTSB Identification: ERA21LA042]. 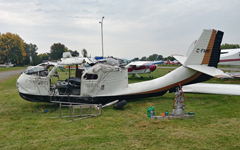 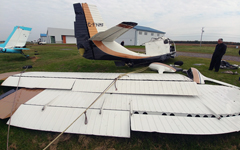 Lake Massawippi, Quebec: An amateur-built Foster 001 C-FNMF (modified Republic Seabee #887) aircraft in private operation was on a visual flight rules flight from the Saint-Hyacinthe (CSU3) to Lake Massawippi, Quebec, with one pilot on board. The pilot began his final descent over Lake Magog, QC, and then landed facing the wind in a southeasterly direction in the northern portion of Lake Massawippi. During the landing, as the aircraft touched the water, the pilot heard a loud noise and the aircraft flipped over. The pilot immediately evacuated the aircraft and was rescued by local residents. He suffered minor injuries. The aircraft sustained substantial damage and sank within one minute of the rollover and would be in 96 feet of water. No emergency locator transmitter (ELT) signal was heard.